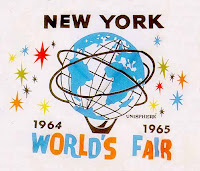 The subject of this edition of the Carnival of Genealogy is “Family Fun.”  We were challenged to research an event our ancestor may have attended.  I chose the 1964 New York World’s Fair.  My parents and both grandmothers attended this fair, and my parents spoke about it often.  The Fair was held in Flushing Meadows Corona Park in the borough of Queens.  The Fair opened on 22 April 1964, and ran for two six-month seasons ending on 17 October 1965.  The Fair called itself a “universal and international exposition”, and covered a distance of one square mile of land.  The Fair’s theme was “Peace Through Understanding” dedicated to “Man’s Achievement on a Shrinking Globe in an Expanding Universe.”  Catchy name, huh?  A twelve-story high stainless-steel model of the earth, named Unisphere, was built to represent this theme of global interdependence (see photo below).

The Fair had exhibits of corporations, countries, states, cities, and space themes, among others.  One of the more popular exhibits was the Vatican pavilion where Michelangelo’s Pietà was displayed.  Walt Disney’s “It’s a Small World” was another favored exhibit, which was eventually rebuilt as an attraction at Disney World in Orlando, Florida.  General Motors Corporation’s Futurama show, in which visitors seated in moving chairs glided past detailed scenery showing what life might be like in the “near-future” was the most popular of all the exhibits at the Fair.  There were a total of 140 exhibits in all, and quite a few of them remind me of Disney World, with audio-animatronics and moving exhibits and theaters.

The Fair was attended by more than 51 million people, but that was short of the 70 million the organizers had hoped for in order to turn a profit.  That caused a 5-year controversy with allegations of financial mismanagement, in which investors only received 10 cents on the dollar for their investments.  Most of the exhibits were just taken down within six months of the closing of the fair, however some were moved to new locations across the USA to be reused or re-purposed.  All in all, the Fair is best remembered as a showcase of mid-twentieth century American culture and technology. 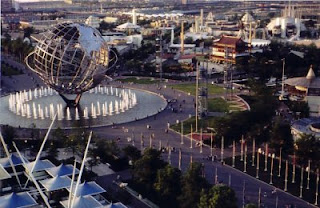 This is a view of the Fair as seen from the observation towers in the New York State pavilion.  The large model of the earth is the Unisphere.