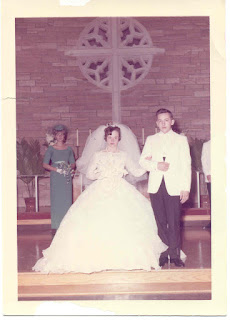 Richard Livingston and Caroline Elbert were married on September 19, 1964 at Holy Cross Lutheran Church in Lake Ronkonkoma, New York.  It was a traditional wedding ceremony. The bride wore a beautiful white lace wedding gown with a huge hoop skirt underneath.  Three attendants dressed in teal gowns preceded the bride down the aisle.  The handsome groom and his three attendants stood waiting at the altar in their tuxedos.  The bride’s oldest brother, Richard Elbert, gave her away since her father had died six years earlier.  After the ceremony, they rode to the banquet hall for the reception and catered dinner.  At the reception, they followed all of the wedding traditions.  They cut the cake, danced the first dance, and tossed the bouquet.  After the wedding, they settled down in a small gray house in the small town of Lake Ronkonkoma.

September 19, 2009 would have been their 45th wedding anniversary if they were still alive.  They celebrated 41 years together before my dad passed away.  Below is a photo taken at their 40th anniversary party, thrown by their three daughters. 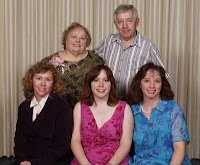