Policeman Shot in the Line of Duty 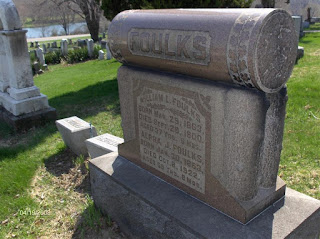 This month’s Graveyard Rabbits Carnival is a “Carousel” edition, which means the post can be about anything relating to cemeteries.  I chose this tombstone because of the story behind William Foulk’s death.  I also find the shape of the stone, especially at the top, fascinating.  William is pictured in his police uniform in the photo above.  His story is below.

William Foulks was born on 29 March 1863, and died on 29 September 1900.  He was a Detective Lieutenant in the Cleveland Police Department until his untimely death at 37 years of age.  In July of 1900, workers at seventeen foundries went on strike because the employers refused to give them a 10 percent wage increase. William Foulks was shot and killed while responding to a fight between these striking union molders and the non-union men who were recruited to work the striking molders jobs.  Six months later, members of the Iron Molders Union’s Local 218 were still on strike, demanding “living wages.”

William Foulk’s name is inscribed on the National Law Enforcement Officers Memorial Wall in Washington, D.C.  He left behind a wife and six children when he died.  William was buried in Moultrie Chapel Cemetery, in Columbiana County, Ohio.

3 Replies to “Policeman Shot in the Line of Duty”