Today’s blog subject is “Tombstone Tuesday.” Below is the tombstone of my ancestor, Col. Christopher Truby. He is the ancestor under whom I am applying for DAR (Daughter’s of the American Revolution) membership. He was born in Bucks County, Pennsylvania in 1736, and died February 20th, 1802 at the age of 66. He is buried in the German Cemetery, in Greensburg, Pennsylvania. The tombstone below reads: 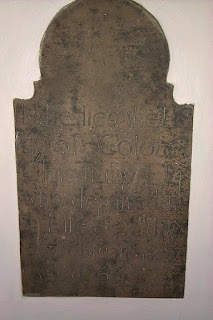 His wife, Isabella, who died August 24th, 1801, aged sixty-three years is laid to rest next to him. Isabella and Christopher had seven children; four sons and three daughters. There is no known likeness of him in existence, but he has been described as “wearing red-topped boots and his hair in a black silk bag.” Col. Truby was very active in public service. In addition to his military service, Col. Truby was appointed Commissioner for Westmoreland County in 1774, and on June 11th, 1777, he was commissioned one of the Justices of the Peace for Westmoreland County, Pennsylvania.

Col. Christopher Truby is my 6th great-grandfather. It has been very fascinating learning about his life.