Randy Seaver of Genea-Musings  posts a blogging challenge every Saturday night that he calls “Saturday Night Genealogy Fun.”  This week’s challenge, in honor of Veterans Day, is to pick an ancestor with a military record and write about that military service, as well as the ancestor’s tombstone.

I have previously written about my Revolutionary War ancestors Christopher Truby and Michael Sanor.  So for this challenge, I decided to choose an ancestor who I have not written about before.  I chose Heinrich Bauman, my 6th great-grand uncle, also known as Henry Bowman.  Henry served in the American Revolutionary War as a Captain in the 4th Battalion of the Pennsylvania Militia.  He was born on 21 Sep 1751 in Montgomery County, Pennsylvania, and died, at the age of 73, on 27 Nov 1824 in Carbon County, PA.  He is buried in St. John’s Lutheran Church Cemetery in Carbon County, PA.  His wife, Catharina (Driesbach) Bauman, is also buried there.  Below is a photo of Henry’s tombstone.  Note the American flag and the DAR (Daughter’s of the American Revolution) memorial plaque to the right of the tombstone. 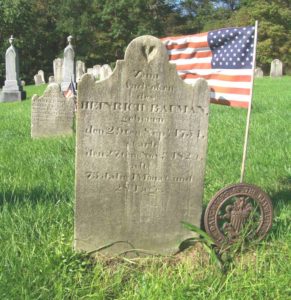